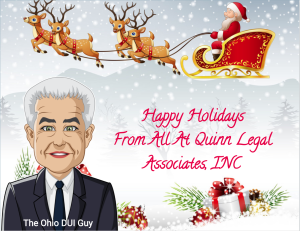 During the holidays folks take to road to travel to spend time with extended families and friends. AAA, states traveling during the holidays has continued to increase each year except last year due to the 2020 covid outbreak, however 2021 looks to be the holiday travel recovery year. Nearly five million people are expected to be traveling in Ohio this holiday season, and 90 percent of those will be driving.

Due to the amount of traffic during the holidays there is an increase in accidents linked to DUI (driving under the influence). The National Highway Traffic Safety Administration (NHTSA) states that, in the last 5 years, around three hundred individuals have been killed in DUI / OVI accidents during the week of Christmas and New Year’s Day. Each year in Ohio, DUI related accidents have been the cause of several deaths during the Thanksgiving and Christmas holidays, according to law enforcement in Ohio.

With the concern of increased drunk driving leads to greater OVI enforcement during this time of year. Local law enforcement and the Ohio State Highway Patrol will add additional OVI / DUI patrols and DUI / OVI checkpoints. The National Highway Traffic Safety Administration (NHTSA) has started again its yearly ‘Drive Sober or Get Pulled Over’ campaign during the holidays urging all Americans to avoid consuming alcohol and driving a motor vehicle.

Motorist stopped by law enforcement face being charged with a DUI / OVI offence along with a variety of additional penalties. loss of their drivers, costly fees, court cost and jail or prison time are just a few of the consequence’s should a person be convicted of a DUI / OVI charge in Ohio.

The most responsible and law-abiding individuals can be confronted with an OVI charge. That doesn't mean that everyone charged with DUI in the state of Ohio is bad, nor does it mean that they are guilty.

Should you or someone you know be pulled over and charged with an Ohio DUI / OVI charge during this holiday season the Ohio DUI Guy and his team with over 44 years of legal experience are here 24/7 to help.

EXCELLENT Based on 305 reviews.

Marilise Davila
Mr. Quinn is a well respected and hardworking attorney. His services are not to be abused but if you find yourself into some trouble you definitely want Mr. Quinn to represent you!

Tyler Laughlin
Pat exceeded my expectations. Very professional and knowledgeable. Made me at ease with everything going on with my case and kept me updated the entire time. By far recommend.

Kevin Jordan
Mr Quinn is the best attorney I have come across. He actually cared about my legal situation and was there every step of the way. Never had an issue getting in touch with him, or getting answers to any questions I had. Getting Mr. Quinn to represent me was the best decision I made.

Matt M
Patrick Quinn is hands down the best OVI/DUI attorney you are going to find throughout Cleveland. From day one, he set expectations and helped steer me through the complicated legal process of obtaining the most favorable judgement in court. He is worth every penny and I wouldn’t think twice about recommending him to any friends or family who end up in an unfortunate situation. Thank you for everything. You truly are life saver!

Tirzah Pouliot
The representation I received from everyone at Quinn Legal Associates was outstanding. They showed up for me when I needed them and helped me resolve my case in a way that was incredibly beneficial for me. If you’re looking for a legal team that will ensure you get the best outcome I would highly recommend you call Quinn Legal Associates.

Lindsay M
In May 2022, I made the mistake of having 3 glasses of wine and driving home. Around the corner from my home, I received a text from my friend making sure I got home ok. I looked down at my phone and when I looked up, a car was parked on the street right in front of me. I totaled my car and had minor injuries. I refused the breathalyzer test and field sobriety, so was arrested right then. It was the worst night of my life. I have never been in trouble and never drive drunk. The next day, I contacted Pat Quinn to represent me. There were minor hiccups with courts not being prepared for my pre trial and then the courts closed due to protesting. Pat was able to get me driving privileges within 11 days of my accident. My charges were reduced to Failure to Control and I got zero points on my license. If it wasn’t for Pat, I’m not sure what would have happened! Huge thanks to him for his work ethic and compassion.

BigBang Guy
Pat Quinn the Ohio DUI Guy is hands down THE best attorney to call for your dui case Pat and his team are professional, knowledgeable, and personable, treating their clients like they would treat one of their own family members - not just another client with a dui case. If your seriously wanting to win, I highly recommended Pat Quinn the Ohio DUI Guy for the win !

Forever Anonymous
Atty Quinn is Phenomenal. And represent his clients with compassion. Willingness to listen. as well as Good Judgment, Be Honest. And you win with Atty Quinn I thank you.